Market Insights: One Foot in Front of the Other 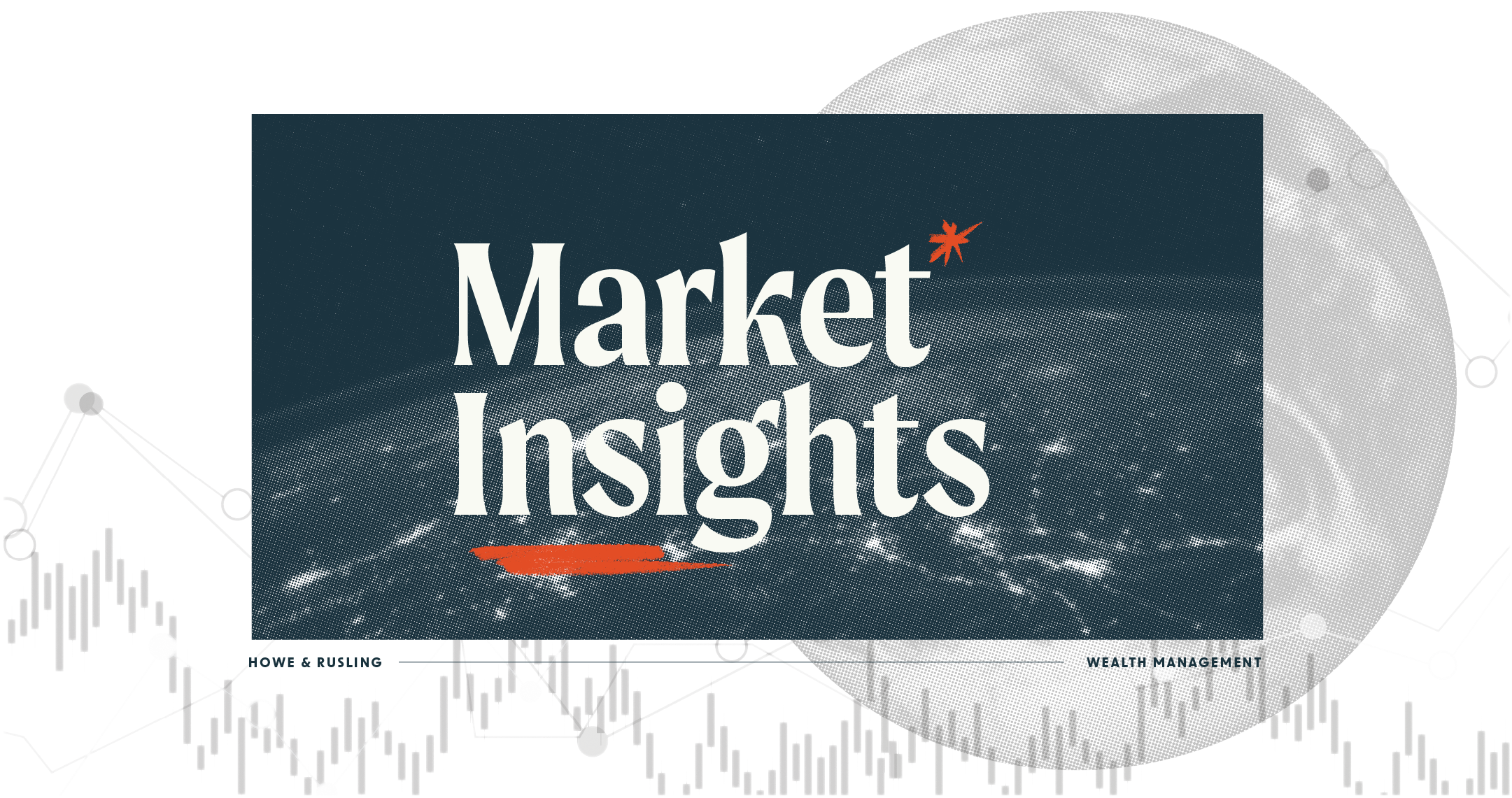 With another volatile week nearly behind us, I think it’s worth revisiting some words I penned at the beginning of this year.

Years ago, I graduated from the U.S. Army’s Ranger School. Ranger School is often touted as one of the military’s most grueling experiences, short of actual combat. At its shortest, the school lasts for 62 days. I say “at its shortest” because each 20-day phase has the potential to be repeated. Additionally, during each phase the weakest trainees are voted out by their peers in a Survivor-like atmosphere (this is known as “being peered”). At its core, the school is designed to teach soldiers how to successfully lead units in combat under immense physical and emotional stress, with limited resources, while facing brutal terrain, and a determined enemy. Trainees can expect to get 1-2 hours of sleep per night (if that) and consume maybe 1-2 hasty meals per day (I started the course at 187lbs and finished at 153lbs). Ranger grads laugh at the story that has made its way around over the years about a soldier, deployed to Vietnam, who woke up in a cold sweat one night, having just had a nightmare. The soldier looked around and sighed with relief, “Oh, thank God. It’s only Vietnam. I thought I was in back in Ranger School.”

The second phase of Ranger School is known colloquially as “Mountains” and takes place at Camp Merrill in the Blue Ridge Mountains of Dahlonega, Georgia. In this phase, the stamina and commitment of the Ranger student is stressed to the maximum. At any time, a student may be selected to lead tired, hungry, and physically exhausted students to accomplish a mission. This usually consisted of an infiltration to an objective (miles on foot through the mountains, jumping in with parachutes, landing in a helicopter, or some combination thereof), an attack of some kind, and then a grueling movement to another staging area where the whole process was repeated. Students are evaluated by Ranger Instructors who provide the coveted “GO” or notorious “NO GO” grading criteria depending on how successful the mission was. Receiving a “NO GO” generally meant the student would recycle the phase or be dropped from the course.

It was during this phase that I became comfortable at being uncomfortable. We would ruck through the mountains for so long that I would literally fall asleep while walking. I would lean forward over my knees to give my shoulders a brief respite from carrying an 80lb rucksack and fall asleep for a few seconds or a minute. In those moments I would fantasize about eating Strawberry Pop Tarts covered in peanut butter (I don’t think I’ve ever actually eaten that in real life…but extreme hunger and lack of sleep will distort your mind). The winter conditions were soul crushing. Freezing, tired, hungry, and exhausted. That was the constant state in which I operated. In those mountains, I became comfortable at being uncomfortable.

In his book Succeeding, author John Reed writes, “When you first start to study a field, it seems like you have to memorize a zillion things. You don’t. What you need is to identify the core principles – generally three to twelve of them – that govern the field. The million things you thought you had to memorize are simply various combinations of the core principles.”

Just like Ranger School, in investing and financial planning, an above average ability to cope with misery is a core principle that will govern most of your long-term results. It is the most fundamental of all investment principles. Investor Morgan Housel writes, “Returns do not come for free. They demand a price, and they accept payment in uncertainty, confusion, short-term loss, surprise, nonsense, stretches of boredom, regret, anxiety, and fear. Most markets are efficient enough to not offer any coupons. You have to pay the bill.”

Everything worthwhile in investing comes from compounding, which takes time and is emotionally hard. We become our own worst enemies in this regard. Just like in Ranger School, the long-term goal of earning the coveted Ranger Tab is actually done through a series of short-term events. It starts with putting one foot in front of the other and making it to the top of the next hill or just making it through the night. It means not quitting when the going gets tough and ignoring that voice in your head that says, “make the pain stop.” Investing is no different. There is a direct correlation between one’s ability to withstand pain (e.g., extreme market volatility) and the generation of long-term results (e.g., compound interest).

This time component of compounding is why 99% of Warren Buffett’s net worth came after his 50th birthday, and 97% came after he turned 65. There’s no doubt he is a phenomenal investor, but Warren’s true superpower is having the stomach to remain continuously invested over 80 years through the ups and downs. Recall in 2008 when Buffett wrote, “Over the long term, the stock market news will be good. In the 20th century, the United States endured two world wars and other traumatic and expensive military conflicts; the Depression; a dozen or so recessions and financial panics; oil shocks; a flu epidemic; and the resignation of a disgraced president. Yet the Dow rose from 66 to 11,497. You might think it would have been impossible for an investor to lose money during a century marked by such an extraordinary gain. But some investors did. The hapless ones bought stocks only when they felt comfort in doing so and then proceeded to sell when the headlines made them queasy.” The market would proceed to fall another 24% after Buffett penned those words, but he kept buying U.S. equities.

Investor Bill Miller echoes this point, “In the post-war period the U.S. stock market has gone up in around 70% of the years…Odds much less favorable than that have made casino owners very rich, yet most investors try to guess the 30% of the time stocks decline, or even worse spend time trying to surf, to no avail, the quarterly up and down waves in the market…We believe time, not timing, is the key to building wealth in the stock market.”

As investors, we can study standard deviations and risk. We can model drawdowns and market corrections. Our flaw, however, is that as humans when we visualize stock market losses, we imagine ourselves in some hypothetical world where the only thing that has changed for the worse is the stock market. But stock market drawdowns do not exist in a vacuum. What we cannot visualize is the state of the world that causes that stock market downturn and how it feels to live through moments where the headlines are filled with World War III jargon, pandemics, inflation, and civil unrest. It’s these emotions, and their control (or lack-there-of) that can lead us down the path of continued wealth creation or sudden destruction.

Financial planner Carl Richards once made the point that a house might be the best investment most people ever make. It’s not that housing provides great returns. It’s that people are more likely to buy a house and stay in it without interruption for decades. It’s the one asset people give compounding a chance to work because a house doesn’t have a price ticker above it.

So, while the stock and bond markets are downright ugly (21% off the highs at the time of this writing), fight the urge to needlessly interrupt the compounding of your assets. I’m sharing the chart below because it helps remind me, and hopefully you, that there are always reasons to sell. The only certainty is uncertainty. That’s always been true. Dig deep and find it within yourself to become comfortable at being uncomfortable for long periods of time. Every valley and trough in the chart below felt awful in the moment, but somehow the march of progress and business ingenuity continued. Don’t bet against America. Keep moving forward. You’ll be okay. 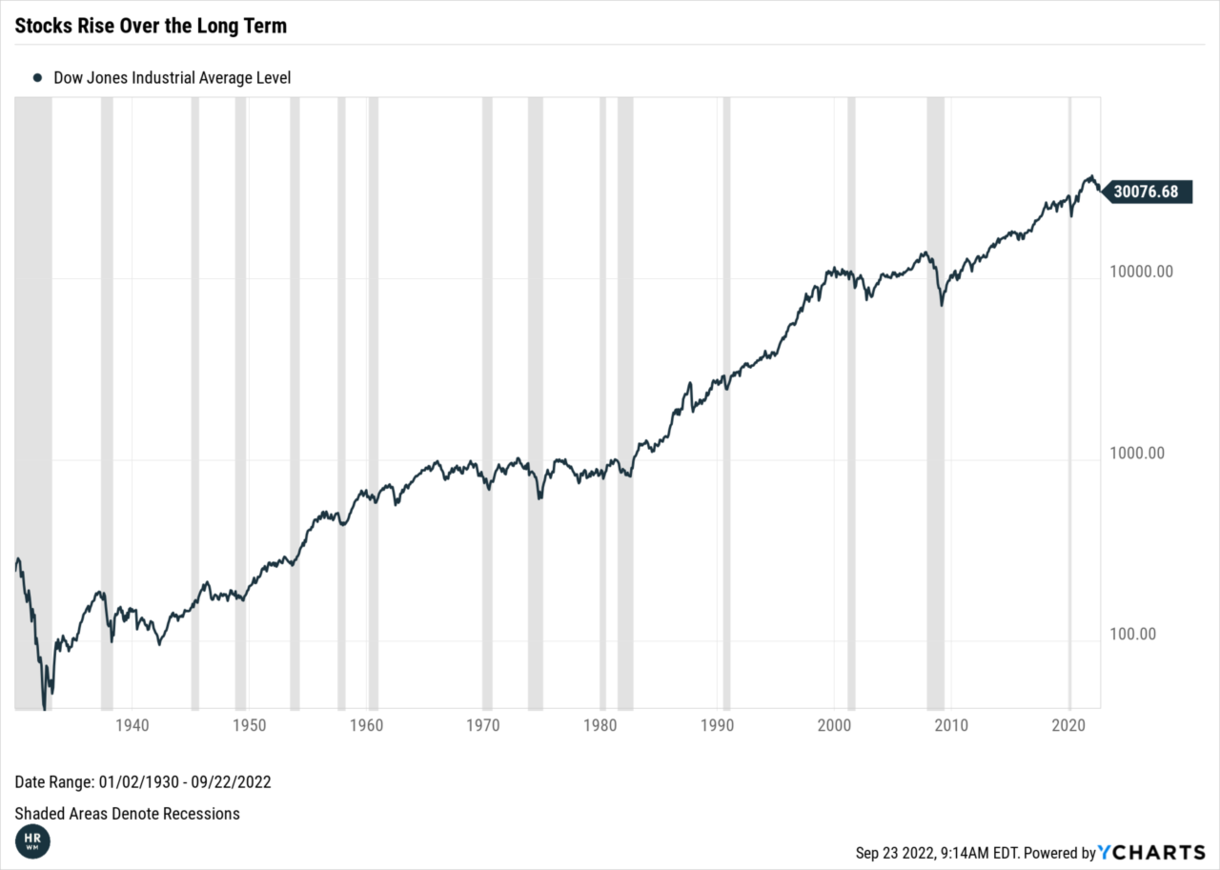