Letting history be a guide.

On the brink of the first presidential debate and roughly a month before November 3, we’re sure you have questions about the upcoming election and the impact it will have on the financial markets. While it is nearly impossible to predict the exact policies in the next year that will influence the market, from either side of the aisle, we want to share our thoughts on what is reasonable to expect from what we know right now. As we wade into political waters, we do not intend to indicate a preference for any scenario or take a political side, but rather to think through the likely impact of any of the possible outcomes.

As it currently stands, many of the polls, and by extension, websites dedicated to poll analysis, currently give the Democratic Party the edge on winning the presidency, Senate, and retaining the House of Representatives. Of course, polls can be wrong, and we know what happened in 2016, but if this scenario occurred, what would be the likely ramifications?

The Biden/Harris platform includes many ambitious initiatives—notably, raising the minimum wage to $15/hour, providing two free years of college education, student loan forgiveness and loan re-structuring, significant federal investments to combat climate change, increased benefits from social security, and protecting and building on the Affordable Care Act. All of these well intended policies would be paid for and funded, to some degree, by the federal government.

On the surface, it’s logical to think that the market would view the need for an increase in tax revenue as a hinderance to economic growth and therefore lower stock valuations and prices. However, after closer review, many Americans could stand to benefit from the Democratic Party’s tax proposal. Vice President Biden claims that he won’t raise taxes for anyone making less than $400,000 and would increase the child tax credit and child and dependent care credit, positively impacting families.

Instead, the Biden/Harris tax plan moves the highest personal income rate back up to 39.6% (it was lowered to 37% by the 2017 tax reform law), caps itemized deductions for wealthier Americans, and phases out the 20% deduction for qualified business income for upper-income taxpayers. Vice President Biden has also proposed eliminating the step-up in basis for inherited capital assets, which means more taxes on wealth passed to heirs, and ending favorable tax rates on capital gains for anyone making over $1 million. On the corporate side, Vice President Biden is proposing to raise the corporate tax rate to 28% from 21% (it was lowered to 21% by the 2017 tax reform law) and impose a 15% minimum tax on book income.

No doubt, grappling with the potential change in tax law will create market volatility as the market prefers certainty and consistency. The proposed policies would affect many businesses and high-income individuals, with implications that are far reaching. However, many wealthy Americans and corporations are best positioned to deal with tax changes—they happen fairly often, and at the end of the day they may want to simply understand the rules of game so they can then turn their focus towards winning.

While we’re on the topic of taxes and spending, the fiscal response to the COVID-19 crisis in March, through the CARES act, increased the national deficit to a level where it is projected to eclipse annual GDP this year or next. This will be a continued headwind for the long term, but in the short term the CARES act provided the “shot in the arm” that many individuals and small businesses needed to stay solvent. Combined with the monetary measures from the Fed, we dipped out of a recession quickly and are hopefully on the road to continued recovery. One area that seems certain is that Congress will eventually approve more fiscal stimulus. Although, the amount of the second package and exact parameters for the aid differ greatly for each party. The Democratic proposal is again on the more ambitious side, including higher payouts to individuals and funds for local and state governments. It’s conceivable that the market would view a Democratic sweep as a pathway to much more stimulus and respond positively, as it did in the second and third quarter of this year.

So, what does history tell us when Washington is run by the Democratic Party? On average, the market has moved higher by 2.96% per year since 1900. Could this scenario be different than the historical average? Of course. However, with mid-term elections always on the horizon after a full party sweep, the willingness of the “purple state” representatives to sign off on any more aggressive legislation is always in check. Combine that with continued uncertainty regarding COVID, and there may by limitations on what a Democratic government can do. There are reasons to believe that the market would not react to this scenario as the doom and gloom event that many are fearful of. 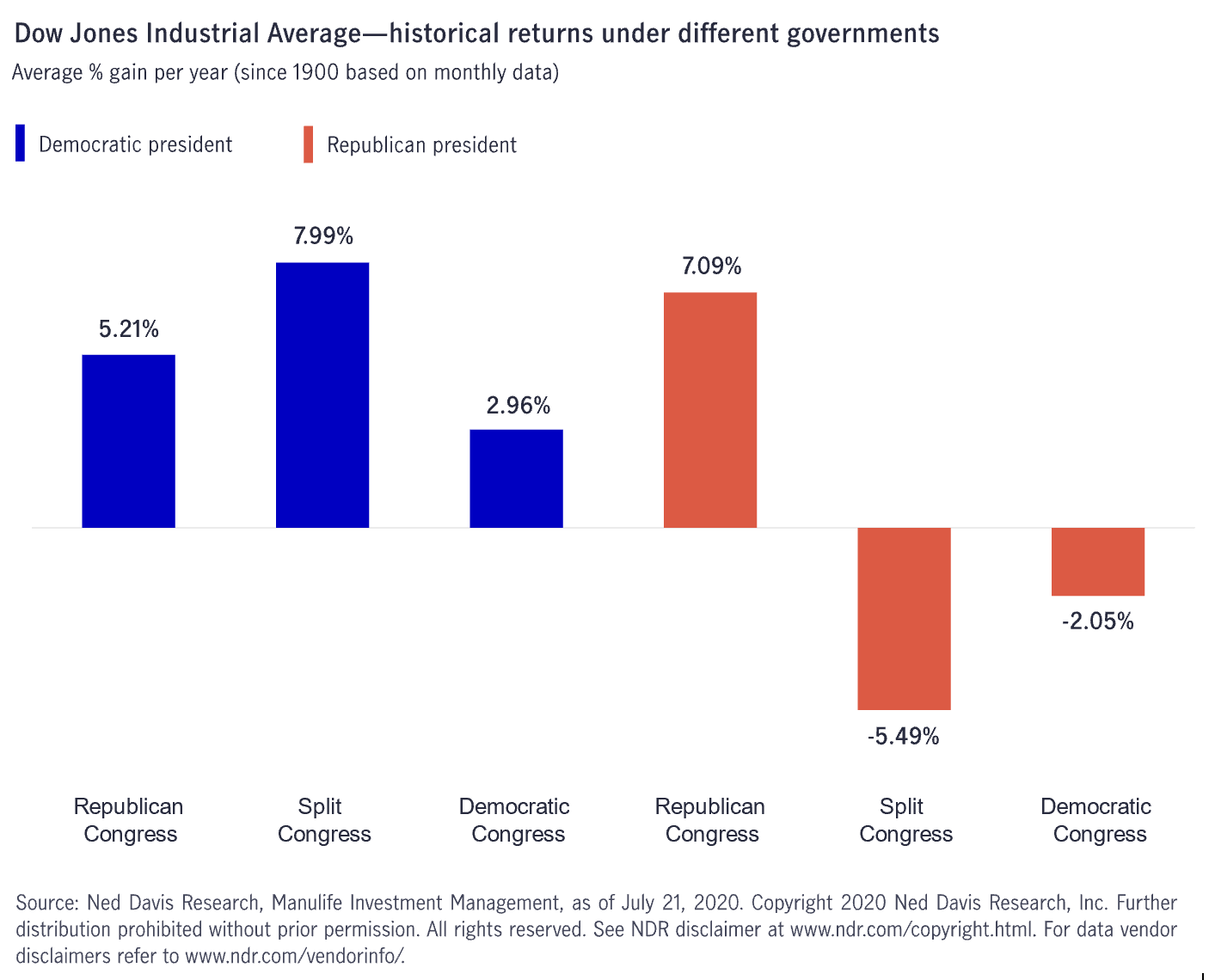 Based on historical data in the chart above, the best outcome for the market is for a Biden presidency and Congress remaining in its current form. Effectively, the Republican Senate would act as a shield, repelling any legislation that it deems too partisan. Under this scenario, there most likely would not be any significant change in tax law and the market would most likely view this in a positive light. While Congress is divided and entrenched in the battle of its respective issues, the market will look to the economic fundamentals for direction. The prevailing hope would be that irrespective of political differences, the need to continue with more fiscal stimulus would be recognized. The market would likely anticipate this and move higher on this expectation.

As noted in the chart above, historically, a Republican president with a split Congress has averaged a -5.49% annual return. A Democratic president with a split Congress has averaged 7.99%. There are, of course, many factors contributing to these returns, and party platforms have certainly shifted in many ways over the years. While the power to enact laws rests with Congress, an increasingly favorite tool used by presidents has become the executive order. President Trump used this power with the tariffs that he placed on Chinese goods in 2018 and could continue to do so in other economic impactful ways. While Vice President Biden does not have a direct track record with executive orders, chances are that he would do the same.

Regardless of who the president is and the corresponding party in power, a divided Congress, with the ensuing checks and balances, may perhaps cause less uncertainty and therefore calmer markets. Furthermore, the chart below notes that from 1900, the median annualized return is 6.6%. Although important for the direction of our country, history seems to show that who holds the presidential seat may not significantly affect market returns. 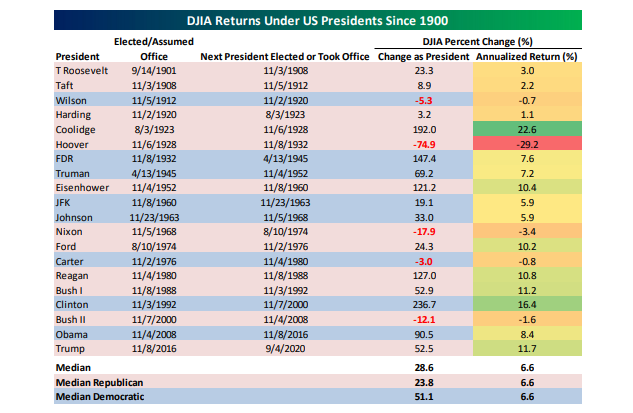 In many circles, the popular belief is that the market would roar again under a Republican controlled government. The 2017 Tax Cut and Jobs Act certainly provided the catalyst for strong cumulative market returns from 2017-2019, before the COVID-19 pandemic. The Republican Party’s platform figures to be much of the same: lowering taxes, cutting regulations, and supporting American businesses via new trade deals. Republicans have also discussed an inflation adjusted capital gains tax and eliminating the need for individuals to pay back the suspended payroll tax from President Trump’s August executive order. All these policies, combined with more fiscal stimulus, albeit more moderate when compared to the Democratic proposal, would seem to suggest a boon for the financial markets.

However, it is important to realize there may be unforeseen risks to this outcome beyond the surface. President Trump has not minced his words about blaming China for COVID-19 and has ratcheted up the rhetoric on the Chinese government. With virtually complete freedom, could “tariff man” (referencing a Trump tweet in December 2018) make a comeback and shake the global markets as the two largest economies resume their boxing match? Or could progress with trade, after signing the phase one trade deal, continue with the finalization of phase two? We don’t know and that uncertainty could cause market volatility like it did in 2018 and 2019.

It’s also important to view the market returns of the Trump Presidency in the right context. Below is a chart depicting the cumulative returns of the past seven presidents. Strictly from a return standpoint, the Trump years have been average and below those of the last two Democratic presidents. While we certainly had been enjoying a bull market, before the pandemic hit, the reality is that relative returns were “middle of the road” when compared to the last 40 years. 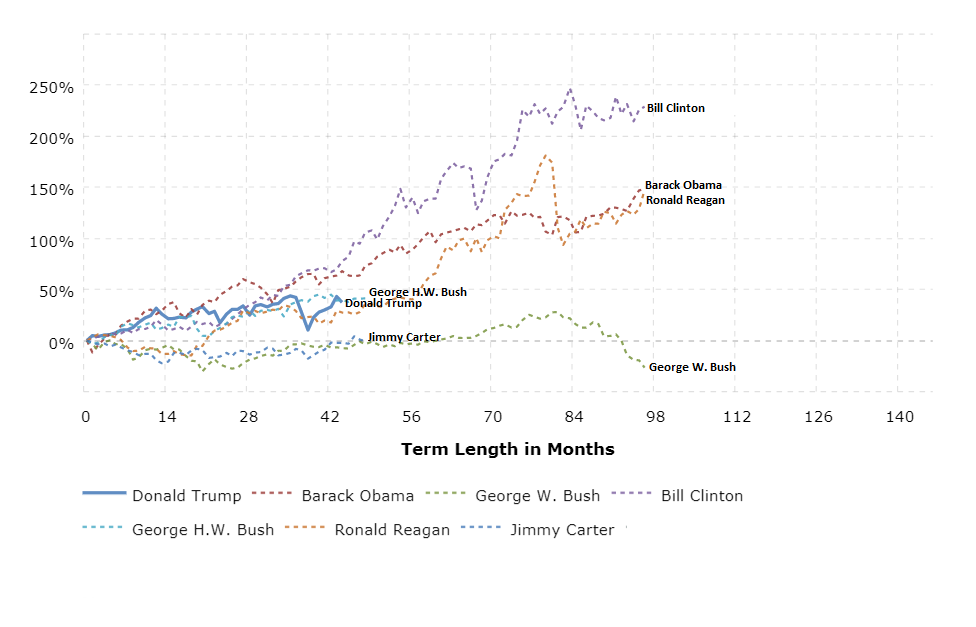 In summary, the uncertainty of the election is currently being priced into the market and will continue to be over the next few weeks and months. As we know, this is a very dynamic situation that will change and evolve as we move closer to Election Day.  One additional scenario that is gaining steam is a possible contested election.  Surely, this would be unfortunate on many levels for our country and we are monitoring the likely impact if this should occur.  In addition, we are continuously studying the macro-economic environment and analyzing the fundamentals of every position in your portfolio.

The fact of the matter is that there are pros and cons for any likely outcome, and viewing the whole picture with an objective approach is paramount.  As always, our chief objective is to effectively manage risk and position your portfolio to achieve your goals and objectives. Please reach out to your portfolio manager if you’d like to discuss any specific questions you have in more detail.